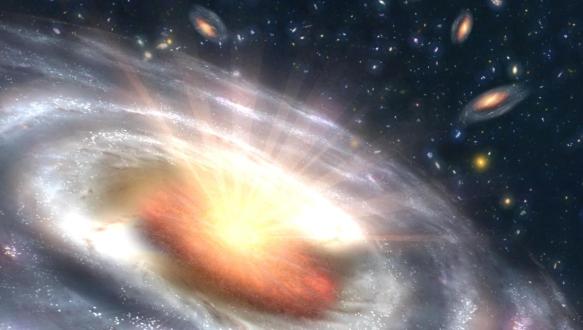 I read an interesting article this morning written by someone who posts as Mehki on the WordPress site Rationalising The Universe entitled “Black Holes: #6 Ancient Relics”.  A welcome distraction from my normal routine of scouring domestic and international “news” sources for what passes as political information but is almost always disinformation and propaganda from which I seek to glean illusive particles of veritas.  It led to areas that also enthrall me in the realms of physics.  Much healthier areas.

Black holes fascinate us, especially for those with some understanding of quantum mechanics the various variants of string theory (11 dimensional M theory being my personal favorite) and interest in black matter and energy (in the latter case, no real understanding available).  All open a chaotic blend of possibilities based conjecture as well as apparent facts, facts that we can’t comprehend because, in some cases, they are very counterintuitive, like the nature of the number “i”, but in others, as in the case of black matter and black energy, because of the dearth of facts.  So we speculate.  Speculating is fun, great fun, we propose hypothesis which critics, as is their role, put to the test, and every once in a great while, enough apparent observational facts are discovered to start the transition from hypothesis to theory.

It occurred to me this morning, as it may well have occurred previously to many others, or perhaps not, first, that in essence the initial stage of creation, the singularity, may in reality have been the most massive black hole possible, although counterintuitively self-contained, and that when it exploded, it converted into a white hole (perhaps, in this case, the variant white “whole” might be appropriate), and among the residue expelled where concentrations of gravity in the form of black hole like structures, themselves exploding to release the little understood primal force that we know as gravity, black hole variants converting into white hole variants comprised entirely, or at least primarily, of the currently elusive particulate gravitons.

A morning for questions apparently.  Probably unanswered, possibly even yet un-speculated, but fascinating.  Certainly more fascinating than the incoherent world of modern politics comprised of fake news, manipulation, hypocrisy and deception (self and imposed) in self-destructive waves of shortsightedness.

Which leads me to speculate on the nature of gravitas and its relationship, if any, to gravity.
_______