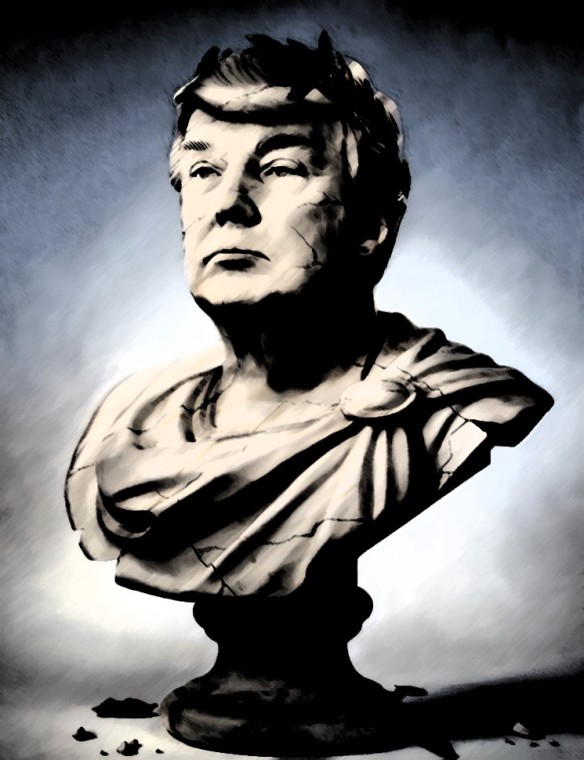 I find it distasteful that I am perceiving equivalencies and analogues between the current Deep State versus Trump crises and those series of events that led to the rise of the Roman Empire, especially those involving the self-proclaimed, antipopulist “Boni” and their extremely unsuccessful campaign to impede Julius Caesar’s political fortunes, the campaign that led to a civil war that destroyed what was left of the Roman “Republic”. Really, the Roman Republic had been pretty much an illusion since the anti-populist assassinations of the Gracchi brothers (perhaps the Kennedies of their time).

For reasons I cannot explain, I’ve always been drawn to the charismatic Julius Caesar, a genius on many levels, but one flawed by many factors, physical as well as moral. That I recognize his flaws provides me with some comfort but at the same time makes me wonder at my own flaws, at our own flaws. What is it about him that is so appealing that it leads one emotionally, if not intellectually, to judge him positively in the end, even if at the same time, one finds that one’s analysis is lacking in logic? I guess that his undoubted talent and genius is a factor, but for me, perhaps more so, his concern for the most vulnerable and his willingness to forgive his enemies, the last a factor that facilitated his assassination while the first may well have prompted it: the common people loved him, the elites, not so much, they hated and feared him.

Parodying the late senator and vice presidential candidate Lloyd Bentsen in his colloquy with Dan Quayle during a 1988 vice presidential debate, imagine the following scene: a very old straw man, perhaps the Wandering Jew Robert Heinlein made famous in his Methuselah’s Children series, responds to a comparison by Mr. Trump of himself and, you guessed it, Julius Caesar:

True, but his opponents in the Deep State, Democratic Party and purportedly “mainstream” media are certainly analogs to the very worst among Julius Caesar’s hysterically hyperbolic opponents, those who convinced a gullible Gnaeus Pompey (self-denominated “Magnus”) to incite a civil war and put an end to even the verisimilitude of the Roman Republic. Odd, however, how much more Pompey resembles Mr. Trump than does Julius Caesar, both physically and emotionally.

Like the Roman Republic at the time, our own also appears to be a mere illusion, one on the road towards a neoliberal-neoconservative empire, albeit an empire that started at the dawn of our republic’s founding, one predicated on and predictable when one analyses the two pillars essential to our international evolution: the Monroe Doctrine and the Doctrine of Manifest Destiny. They inextricably propelled us on the road to empire, the road artfully planned by America’s own Machiavelli, Alexander Hamilton, when he designed our current constitution.

Recently, through the unavoidable law of unintended consequences, matters have reached critical mass, somewhat unexpectedly. Like a random mutation that changes everything, somehow, Donald John Trump, propelled to the GOP presidential nomination by Democratic Clintonites, in order to provide her with the only opponent she could defeat for the presidency, in fact defeated her. Much to his surprise. Much to the chagrin of the Clintons and their neoliberal-neoconservative and deluded backers. She was supposed to win!!! It was her turn. But she fell flat on her, … well, let’s be nice, … “face”.

Now her unbridled thirst for power and desire for revenge in the face of our rejection, Hillary, our own feminist (the times-they-are-a-changing – somewhat) version of that great Roman hypocrite, Marcus Porcius Cato Uticensis (Cato the Younger), is leading a similar attempt at metaphorical scorched earth, … or perhaps, not so metaphorical. With the assistance and collaboration of the Deep State and the “purportedly” mainstream media, Hillary and her minions, incoherently, hypocritically, hyperbolically and utterly destructive of 236 years of constitutional tradition, are mounting a predesigned and coordinated constant stream of putsches against Donald J. (no, not for Julius) Trump, the unlikely victor of the election he was meant to throw, accusing him of everything they themselves have done, are doing, or are planning to do, all the while, as in the case of Caesar versus the Boni, claiming it was the other who was responsible. Kind of like that childish refrain (childish because until now, it was mostly children who used it): “I’m rubber you’re glue, whatever you say bounces off of me and sticks to you!”

Let’s be honest. Who are the meanest, the most ready to calumny and ridicule, to polarize, to divide us, not necessarily for purposes of conquest, but in fits of pique, to destroy us all? Who are the most devious and dishonest, at least as far as facts (think Mueller Report) have illustrated. Mr. Trump is rarely accurate and changes his perspectives from second to second, on a dime, but he apparently believes what he says as he is uttering it. His is not the preplanned, loophole filled, lawyer designed discourse of the Clintons, meant to obfuscate and then escape. Not terribly great choices for us, even when there are Tulsi Gabbards at play, but they are easily sidelined by the purveyors of Deep State propaganda whom we (or at least the most naïve among us) believe to be the modern day equivalents of the journalists the First Amendment was meant to protect.

Caesar won in the last civil war of the Roman Republic, although ultimate victory was obtained by his Machiavellian great nephew and heir, Octavian.

They say that those who do not study history, who fail to learn from the past, are doomed to repeat it. One wonders what awaits us.