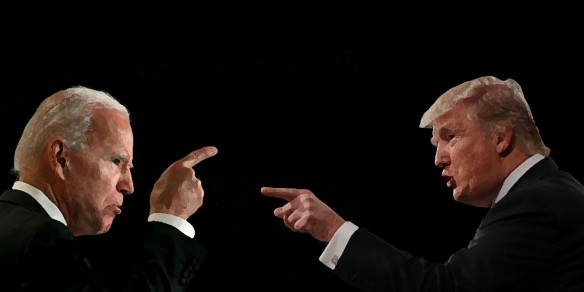 President Trump, reacting as usual to baiting by the MSM on behalf of the Deep State and the Democratic Party, has, once again, naively put his foot in his mouth, imitating a Joe Biden tradition currently kept in check by keeping Mr. Biden virtually under house arrest with comments carefully scripted for him to read without deviation.  The issue this time, proposals to modify traditional electoral procedures purportedly based on the current medical crisis.

To be clear, I did not vote for and will not vote for Mr. Trump.  In the last election I voted for Jill Stein and in the current election I vigorously supported Tulsi Gabbard until she withdrew, betraying her supporters by endorsing the inept and corrupt Joe Biden.  I am currently inclined to support the Green Party candidate, possibly Howie Hawkins, but I am intrigued by a proposal by Dr. Bret Weinstein of the James Madison Program at Princeton concerning a fusion candidacy designed to minimize current polarization (see “Bret Weinstein breaks down Dark Horse Duo plan to save republic” on YouTube).

Both the Democratic Party as a whole and Mr. Trump (virtually alone) seem to be trying to use the current pandemic to manipulate the manner in which the upcoming election is to be undertaken but only Mr. Trump is being criticized.  The suggestions of each are inappropriate.

The Democrats’ suggestion is that paper ballots be mailed to everyone and then, filled out by the voter and returned, again by mail.  In evaluating such proposal one ought to recall that in a recent case brought against the Democratic Party by disgruntled former supporters of Senator Bernie Sanders, that party claimed the right to manipulate primary elections, as it had obviously done.  Based on common sense as well as the foregoing, it would seem that, to any thinking person who has been politically aware during the past decade but has not lost his or her objectivity (not that many people, admittedly), as a methodology, that could, as Mr. Trump has alleged (not everything he says is wrong) easily result in massive fraud.

The Democrat proposal is much different than the fairly easily controlled and currently omnipresent absentee ballot method.  So why the change?  In the absentee ballot case a voter asks that a ballot be sent to him or to her which leaves an easily discernible trail when he or she casts it, a trail that can be verified and that has safeguards against counterfeiting.  As an American citizen living abroad, I have used this fairly secure method for over a decade.  Many, many others do so as well.  It has been somewhat abused recently through campaigns that seek to calcify the vote through earlier and earlier voting in order to lock voters in, preventing them from considering late breaking developments, but that could be easily remedied by placing a limit on how early the ballots could be mailed in.  At any rate, even without such modifications, while it is not immune to the manipulation described, it is not open to widespread fraud.

The Democrat proposal eliminates all the current safeguards for absentee voting and, if Democrat primaries offer any guidance, that party’s electoral machinery has been practicing how to engage in large scale electoral fraud for a decade, something Sanders supporters might remember, especially but not only with respect to California and New York during both 2016 and 2020.  The Trump proposal is a reaction to the Democrat’s attempt to manipulate the election as that party has manipulated its primaries.  It is based on the premise that if voting now is so dangerous that voting in person ought to be eliminated or reduced, then postponing the election rather than opening it up to the chicanery that has rendered the progressive wing of the Democratic Party impotent on a presidential level is a better option.

That too, however, is a bad idea albeit primarily because under our Constitution Congress would have to pass enabling legislation but it is so polarized that it would never undertake the required legislative reform.  Politically, it has no support from Democrats and little if any support from Republicans.  Even from the President’s perspective it should have seemed a dumb idea given the obvious reality that the proposal would immediately be distorted by the Democratic Party and the Deep State through their controlled MSM, as it has been, being presented as a tyrannical attempt to extend his term rather than as a criticism of the Democrat’s nefarious proposal.

It seems to me that the entire issue from the Democrat’s perspective centers on the difference in voter preference intensity between voters who are willing to vote for a candidate they neither like nor trust, Mr. Biden, and those who support Mr. Trump, which makes Mr. Trump’s reactive suggestion politically naïve as an election under normal rules would seem to increase his possibility of succeeding.

Unfortunately, as now seems normal, the United States electorate is by and large justifiably perceived of as a lump of clay to be manipulated through distortion, deception and fear.  Voting against existential threats is the norm, the little boy who repeatedly cries “WOLF” now perpetually ascendant.  Voting in favor of what one believes is passé and the realization that there are many more than two options is carefully hidden away by an utterly corrupt MSM.  But now, even that does not seem enough so, the system needs to be changed to protect against a voter awakening.  Admittedly, nowadays it is necessary for all of us to question our sanity given the constant demand that we “trust what we are told to believe, regardless of how contradictory and inconsistent, rather than what our own sensory perceptions and experiences should have taught us” (paraphrased from, “who are you going to believe, me or your lying eyes?”).  But still, perhaps it’s not too late to think and act for ourselves and for our progeny rather than to continue falling into the trap of perpetual political cowardice and fear.  Our vote is ours and no one else’s, at least for now.

Guillermo Calvo Mahé (a sometime poet) is a writer, political commentator and academic currently residing in the Republic of Colombia (although he has primarily lived in the United States of America of which he is also a citizen).  Until 2017 he chaired the political science, government and international relations programs at the Universidad Autónoma de Manizales.  He has academic degrees in political science (the Citadel), law (St. John’s University), international legal studies (New York University) and translation and linguistic studies (the University of Florida’s Center for Latin American Studies).  He can be contacted at guillermo.calvo.mahe@gmail.com and much of his writing is available through his blog at http://www.guillermocalvo.com.