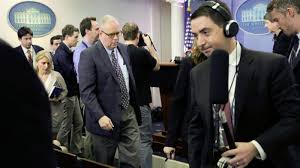 “Gaggles” the appropriate collective term for members of the mainstream media.  “Wonder why”?

Surprised and shocked, the mainstream media reports that “United States’ voters are deeply polarized and pessimistic about the future and that United States prestige abroad seems to be in a steep decline”.

I mean, errrrr, “How humble”.  Humble given the fact that that has been the consistent goal of the mainstream media since the beginning of the second week in November of 2016, to which they’ve consistently dedicated twenty-four hours a day, every day of every week of every month since then.

Can it be that the mainstream media is so “modest” that its members are surprised by their success?  After all, aren’t journalists (like the Hollywood stars they aspire to become), characterized by their modesty and discernment and good taste?  How touching.  Kind of like the movies “Remember the Titans” and “We are Marshall”.  Underdogs succeed.  “Wonder if they’ll have some sequels” someone asks?

Brief introspection from the outside followed by immediate input from within:

Observation:  “The mainstream media of course blames President Trump, personally, well, for everything and anything”.

Response in the form of a chorus:  “Indeed, he’s pretty easy to caricature and make fun of.  A more successful albeit less eloquent Dan Quayle.  Remember him?  He was fun.  But not as fun as Trump!  Trump is putty rather than pretty and putty is so easy to mold into anything we in the mainstream media want, or rather, which our patrons want, especially the lady pouting just about everywhere and kind of like us, blaming everyone but herself for her despair.

Observation:  “It’s true.  Her echoes, like the mainstream media’s negative reporting on the current president [from a corner: “should have been me, damn it!] are omnipresent howls invading not only all our waking moments but even our dreams”.

Response [albeit whispered and apparently unintentional]: “…, as they are meant to do”.

Further responses: “Who?  Us?  Can that be us this ‘despicable’ writer is referring to?”

Writer’s Intervention:  Ahhh, the “despicables”, remember them?  But no, this writer was not among the throngs of Trump supporters, he opted for Jill Stein.

Responses, again (from members of the mainstream media who prefer to remain anonymous, although unanimous in their opinions, replying in a singsong chorus, apparently also dancing, as though auditioning for a play, perhaps “Hamilton” or even a revival of “Evita”:

“Jill Stein?” echoes ask aghast.  “That’s as bad as that evil nitwit Bernie Sanders” other echoes curtly reply!  “At least our hatchets cut them down” respond still other echoes [apparently referring to literary hatchet jobs, journalism “technically” does not provide as much room for creativity].  All the echoes apparently reside in chambers (echo chambers, get it”) deep in the bowels of Washington, DC, and New York City, and, of course, Los Angeles (OK, really Hollywood).

The echoes continue: “and Stein and Sanders were not that easy to caricature so in a sense, it’s great for us that Trump won”.

“Shhhhhhh!!!” demand nervous editors and patrons, “someone might hear you!”

Writer’s intervention (again):  Evidently, people do not want to be thought of us paranoid although more and more of us, especially the more good natured and naïve, are starting to believe that “maybe we are, just maybe it’s us and not the world around us.  After all, if it’s in print or on the tube it must be true.”

Responses (again), still in chorus:  “Tell them it’s all Trump’s fault” (echoes among the echoes in their chambers) “tell them, …!  We’ll make them buy it, it may take time but count on us, … we’ll get it done.”

Again, … surprised and shocked but now also, wearing masks painted in aghast, the mainstream media (Carrie Dann among them) reports that United States’ voters are deeply polarized and pessimistic about the future and that United States prestige abroad seems to be in a steep decline.

Concluding observations by the noble members of the press:

Response from the echo chambers:  “Snickers?  Did someone say Snickers?  Does anybody have one?  I just love Snickers (the candy bar, oh, and well, just plain snickers too).