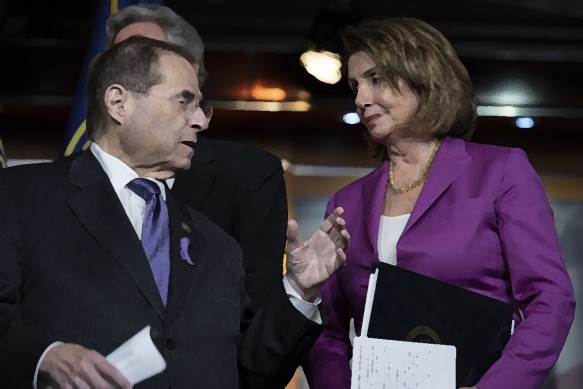 Caitlin Johnstone, an alternative media personality with whom I frequently agree, has been publishing a series of articles taking a victory lap on the basis of the apparent conclusions reflected in the summary of the Mueller report publicly released yesterday by Attorney General Bob Barr (see “Trump Is Going To Repeat This Until November 2020. Thanks, MSNBC”).  As she notes and as is obvious analyzing the reaction of the Russiagate crowd, their recent heroes, Rod Rosenstein and Robert Mueller, have now morphed into villains or, perhaps merely into inept cowards.

It is amazing how much most of the leadership of the Democratic Party mirrors the characteristics of Bill and Hillary Clinton, especially the tenacious dedication to skewing the truth and making feces seem like chateaubriand.  Of course, that is only possible as a result of the “mainstream” media’s dedication to obfuscation, distortion and manipulation rather than journalism.

Take for instance the new replacement for the Russiagate delusion, “exonerationgate”.  Having orchestrated a now failed massive delusion concerning purported “collusion” (whatever that is) with Russia to steal the 2016 presidential election from its designated victor, the Democratic Party leadership and the delusional among its adherents are gleefully touting the fact that Robert Mueller’s report did not formally exonerate Donald Trump of obstruction of justice.  As though that is what the Mueller investigation was about or as if prosecutors are responsible for “exonerating” those whom they investigate.  These are the same people and institutions who crowed about the “exoneration” of Hillary Clinton in the server scandal when a decision not to prosecute in the face of overwhelming evidence (and destruction of evidence) was somehow deemed insufficient for assured success at trial.

Sick really.  Having in an utterly petulant, selfish and fraudulent manner, tortured the country and the world for two years, having exposed us all to increased threats of nuclear annihilation, having destroyed centuries old traditions of peaceful political transitions, traditions unlikely to be reestablished in a healthy manner, the same putschists seek to continue the nightmare for fun and profit (theirs of course) having seen it as the most viable manner to reverse their political fortunes.  After all, look at the Congressional elections of 2018.  Contrary to popular perception, I don’t believe the Mueller report fails to recommend indictments, rather, it indicts the faux journalism of the “mainstream” media, the depredations of the Deep State, and most of all, the selfishness and lack of concern for the common welfare exhibited by Clinton apologists.

These observations come, not from a Trump supporter but from someone to the left of the Democratic Party.  Someone who agrees with many of the positions of the “extreme” left wing of what I perceive to be, at best, a center-right conglomeration of incoherent political postures.  I believe in political positions like universal health care, free education, universal guaranteed income, environmentally protectionist policies, etc., all of which I view as involving prudent investments possible if monetary policy and creation of an expanding monetary supply is returned to the state from its current home in the self-serving financial sector; but the latter is a story for another day.  I am also someone who is willing to acknowledge that not all Trump policies are wrong and that, although I believe that his solutions are myopically short term, acknowledge that some have worked, … at least so far.

The big question I believe this crisis has brought to the fore involves just how responsible an electorate exists in purported Western democracies, especially in the United States, and whether we have the cognitive ability and accumulated folk wisdom to admit to ourselves when we’ve been tricked, manipulated and abused, and the courage to step into terras incognitas and experiment with new options, rather than yielding to our traditional fear induced lesser evils.  To dump the two traditional political parties that do us so much harm and serve masters so very different from ourselves and to reject the faux journalism that characterizes almost all of the “mainstream” media, … perhaps boycotting all of its advertisers, … for a start.

As Albert Einstein is reputed to have counseled, repeating the same actions and expecting different results pretty much defines insanity, whether personally or socially.