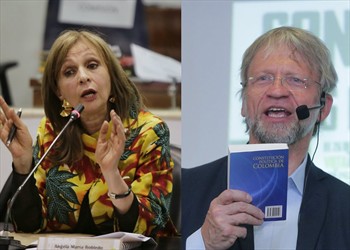 Western media, especially in the United States, have been mercilessly beating drums for regime change supplemented by devastating United States government imposed economic sanctions in the Bolivarian Republic of Venezuela, allegedly in the name of defending democracy and promoting liberty.  United States efforts have, in large part, been implemented with the connivance and assistance of United States proxies, the Republics of Colombia and Brazil, both now led by authoritarian right wing governments eager to surrender their countries’ natural resources to whomever the United States and the global neoliberal order selects.  Obviously that does not sit well with their populations who have recently realized they were deluded in recent elections through fear mongering and electoral manipulation which they now seem powerless to resist.  The good old days of Washington dominance seems reborn, this time much better organized to avoid the return of progressive populism such as that once instilled by the likes of Hugo Chavez, Pepe Mujica, Rafael Correa, Evo Morales and others.  The Ugly American is back, regardless of which major political party rules from Washington.

In Colombia this has been made devastatingly clear as former president Alvaro Uribe Velez, through proxies (being constitutionally inhibited from direct reelection) has solidified dictatorial control over all of that country’s political and judicial bodies.  They, in turn, using tortured legalistic tactics unequally applied, have virtually emasculated the political opposition, making it virtually impossible for it to meaningfully participate in electoral contests for the foreseeable future.  While large scale corruption and human rights violations, including crimes of lèse-humanité by Uribe partisans, are obvious, impunity reigns.  The country’s attorney general has been exposed as a lynch pin in the international Odebrecht scandal (see “Colombia’s biggest corruption scandal gets more complicated”, the Economist, November 17, 2018) but remains firmly entrenched in power and together with most leading politicians formerly backed by Uribe, is apparently immune from any effective attempts at prosecution.  On the other hand, the leading figures of the political opposition have been removed from office in the Senate and House of representatives on obviously ludicrous grounds and the main opposition group in last year’s presidential elections, Colombia Humana, which garnered the second highest vote total in Colombian history, has been denied legal status to participate in next year’s departmental and local elections.  Venezuela, in the meantime, has a virulently active political opposition with a putsch leader having proclaimed himself as president although he has no power other than that provided by United States misdirection of international Venezuelan economic assets to his personal control, exacerbating rather than mitigating the Venezuelan humanitarian economic crisis.

All of the foregoing is blatantly obvious with little efforts to hide the relevant facts, that’s hardly necessary.  The “mainstream” media either merely ignores them especially in the xenophobic United States, or reports them colored in Deep State rhetoric.  For the most part, it’s way too busy chasing fantasies of Russian meddling everywhere to notice the irony or the real news.

The result in Colombia is that two of the country’s most prominent opposition leaders have been removed from office, the leading political opposition group in the country has been deprived of legal status, and thousands upon thousands of civic and social leaders have been murdered with impunity by paramilitary forces loyal to former president Uribe, while the current Colombian administration joins with the United States in demanding the removal of the Maduro government in neighboring Venezuela because of alleged dictatorial and antidemocratic tendencies.  The result is also that the Peace Accords negotiated and entered into between the Colombian State and the Revolutionary Armed Forces of Colombia (FARC) which have been fully complied with only by the FARC are in danger of being marginalized as the de facto Uribe administration refuses to honor them, seeking to impose unilateral modifications that would shield Uribe partisans from responsibility for crimes against humanity and deprive the FARC of most important protections under the accords.

Brazil is not much better under dictatorship friendly, recently elected president, Jair Messias Bolsonaro, elected after a legislative – judiciary coup overthrew democratically elected president Dilma Rousseff and then barred popular former president Luiz Inácio Lula da Silva from running by arresting, convicting and jailing him on trumped up charges of corruption.  As in Colombia, the right wing now in power is riddled with credible charges of corruption but enjoys virtual impunity through the corruption inherent in the highest levels of its judiciary.

Thus, as in so many other parts of the world, the United States and its bewilderingly incoherent mainstream media provide the narrative support necessary to maintain corruption in power, in the name of transparency, democracy and liberty, while seeking regime change everywhere that access to economic exploitation of a country’s natural resources is restricted.

The list is long, Iraq, Afghanistan, Libya, Syria, myriad African countries, the Ukraine, but the Americas most of all.