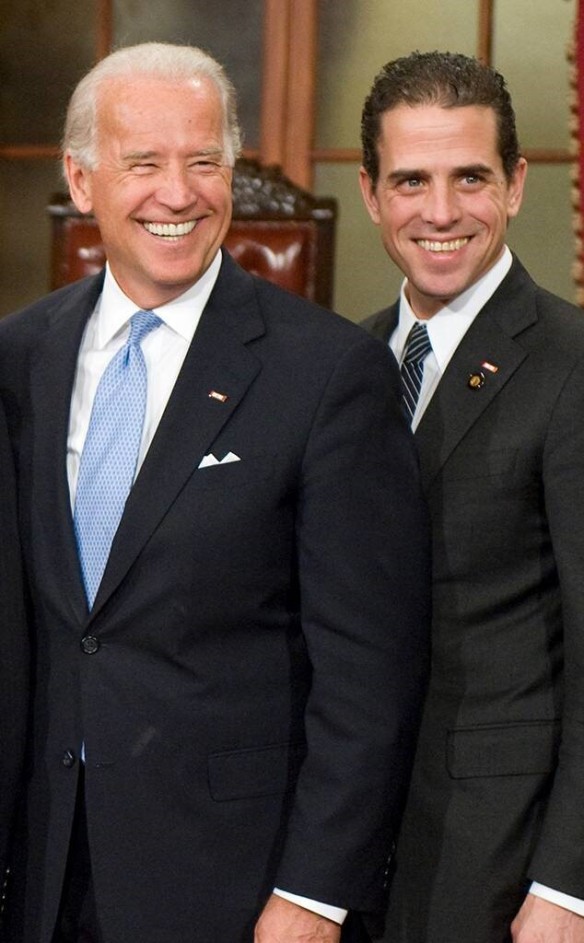 The current creative scandal de jour, the one that purportedly broke the camel’s back on presidential impeachment, needs a bit of context but the purported “mainstream” media cannot be counted on to provide it.  It would be unethical, they are the duly bought and paid for cheerleaders for the campaign to dazzle and deceive and obfuscate necessary to secure Democratic Party electoral triumphs in the upcoming 2020 federal elections and to keep embarrassing and possibly illegal activities by the Democrats during the 2016 campaign hidden, activities that, ironically, mirror the allegations cast during the past three years against, … wait for it, … the Trump campaign.

At the center of the current storm rests Hunter Biden, the youngest son of former vice president Joe Biden, a current political lightning rod in the Ukraine affair.  He needs a bit of contextualization, especially in an era when the children of current President Donald Trump are so often placed through the ringer by the media.  Hunter is really his middle name, his first name is apparently Robert, but it would be understandable if objective observers came to believe that his middle name was “scandal” or “nepotism”.  Fortunately for him (and even more so for his Dad and perhaps, even more so for the Democratic Party), for the most part the Hunter scandals have been disguised as needles by the “mainstream” media and hidden in massive hay stacks, or perhaps, more accurately, piles of bovine manure, huge piles, but perhaps we can shed a bit of light, light of the easily verifiable variety for readers interested in facts rather than mere aspersions and calumny.

Among the ignored scandals that need contextualization in order to cast light on the nepotism which has proved so beneficial to Hunter are his rise and immediate fall from grace as a member of the United States Navy, a career that he ironically started at age 44, an age when most career naval officers are retiring.  A career in which his elder brother Beau apparently served with distinction.  Hunter, on the other hand, secured a prestigious direct commission to the U.S. Naval Reserves in 2012 as a public affairs officer. That program recruits civilians without prior military service who have “special skills critical to sustaining military operations.” Hunter’s primary qualification for the cushy part-time job was apparently only his last name as no other qualifications seem apparent.  Imagine that happening to a Trump child? Perhaps in Hunter the Department of the Navy sensed another Beau.  If so, they were mistaken.

The power of nepotism seems obvious in the case of Hunter.  In order to secure the rare direct commission (no Naval Academy or Citadel for Hunter) he had to be granted two waivers.  Ordinary applicants (if any applicants to that program can be considered ordinary) have to meet age restrictions (under 40 then, under 42 now, at the time Hunter first sought the position he was 43). Then Hunter required an even more special second waiver, one to avoid otherwise applicable restrictions on commissioning officers who had a history of prior cocaine abuse. Quantitatively contextualizing this affair, apparently only six public affairs officers received such direct officer’s commissions from the Navy Reserves that year, Hunter one of the “fortunate” few.

Notwithstanding the opportunity provided through apparent abuse of his father’s public position as vice president of the United States, Hunter Biden barely served a year.  He was promptly cashiered from the Navy in disgrace after testing positive for cocaine during a random drug test, a matter hidden from public disclosure until a whistleblower told The Wall Street Journal eight months later. While normally such a discharge would have subjected the violator to sanctions under applicable norms governing the legal profession, investigation or review of his law license by the Connecticut bar was studiously avoided. Does anyone else wonder why?  Hunter is a lucky guy!

Apparently the hidden scandal did not pose career problems for Hunter, at least while his Dad was vice president.  A month after his discharge from the Navy Hunter was appointed to the board of directors of Ukraine’s largest private gas producer, Burisma Holdings, somewhat surprising given his complete lack of experience in either Ukrainian affairs or the energy industry, which perhaps explain his meager monthly salary of $50,000 (well, perhaps not meager to most of us but the Clintons do at least as well, and usually merely for speeches, as do the Obamas).  It seems noteworthy however that the Clinton-Obama administration of which his father was an important part was responsible for overthrowing the democratically elected Ukrainian administration in which Hunter now sought financial opportunities (apparently, payback is not always a bitch).  Unfortunately, at least it would have been unfortunate under normal circumstances, like Hunter, Burisma Holdings apparently had ethical problems involving potential criminal conduct.  Again no problem, his faithful Dad orchestrated the firing of the chief investigating prosecutor by threatening to withhold over a billion dollars in funding due the Ukraine, unless the prosecutor was eliminated within six hours, something to which he proudly alluded in a Council of Foreign Relations speech during 2018.

As reported in a New York Post editorial article published on September 23, 2019 encaptioned “Why is most of the media circling the wagons to protect Hunter Biden?”:

But Chris Heinz found Hunter’s conduct a bit much and terminated his association with Hunter apparently due to misgivings concerning Burisma (see Alana Goodman’s article in the Washington Examiner published on August 27, 2019, “John Kerry’s son cut business ties with Hunter Biden over Ukrainian oil deal”) where it was disclosed that “[h]ours after Biden’s board appointment went public on May 13, 2014, Heinz emailed [the following message to] Matt Summers and David Wade, two of his stepfather’s top aides at the State Department: ‘Apparently Devon and Hunter both joined the board of Burisma and a press release went out today, …’  ‘I can’t speak why they decided to, but there was no investment by our firm in their company.’”  Chris Heinz is hardly a GOP or Trump operative, nor, one might expect, is his dad, a former Democratic Party presidential candidate and former United States secretary of state himself.

I guess one conclusion with respect to the foregoing is that former vice president Joe Biden is a great dad and I think that’s true.  As a father he suffered terrible trauma when his wife was killed in a traffic accident leaving him a single parent charged with raising young children.  He apparently did a good job raising his oldest son, Beau.  But in the context of the scandal manufacturing machine into which the Democratic Party has morphed in its efforts to overthrow the democratically elected Trump administration (much as the Clinton-Obama-Biden administration successfully did in the Ukraine), and in the context of Joe Biden’s current quest for the United States presidency in 2020, that is not the issue.  The electorate deserves to know the truth, whatever its source, as it deserved to know the truth about Hillary Clinton and Donald Trump in 2016.  But now, as it was then, the role of the purportedly “mainstream” media is to assist in obfuscation of unwelcome truths that reflect poorly on the Democratic Party.

“The best defense is a good offense” has become the slogan of the Democratic Party, a tactic perfected by the Clinton power couple that transformed the Democratic Party into a neoliberal bastion.  And “truth, honesty and integrity”, especially among journalists, have apparently been successfully crushed amid a torrent of hyperbolically hypocritical allegations manufactured on a seemingly hourly basis.  Still, the current scandal being dubbed Ukrainegate is exceptional in its daring.  Are we really stupid enough to ignore the context and buy the creative narrative just because we disapprove of the Republican administration in power?

Perhaps.  We’ll see all too soon.  After all, similar tactics catapulted politicians into office before.  Think the Weimar Republic in 1933.
_______