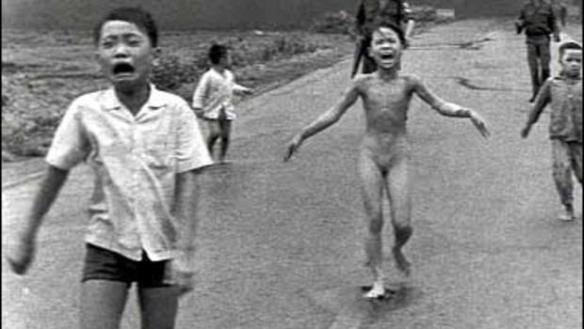 The most famous photograph of our times, reflecting the importance of art in changing policies and politics and hearts and souls.

Ambivalence is such a pale word to represent the utterly conflicting emotions the name Vietnam evokes in so many of us, a price so high from which to have learned so little.

Vietnam, the war that wasn’t a war but in which millions died, including 58,200 Americans, some my friends, some among the best people I’ve ever known.  Many friends fought there and suffered there and changed there and became what they are today, for good or ill there.  Many who sacrificed there came home, not just to an ungrateful nation but to a nation that despised and deprecated them, a nation that couldn’t understand what had happened or why.  And for good reason.  Apparently there was no real justification for what happened, but to those who paid the unconscionable price for their leaders’ criminal folly, the additional price extracted by those who suffered only pangs of conscience from their comfortable homes or dormitories or coffee houses or bars was as bad or worse.  Not that the critics were wrong, they just misplaced their criticism, criticism which should have been directed at their political leaders on a bipartisan basis, the political leaders for whom both soldiers and protesters were no more than political chips with which to gamble away real lives.  The political leaders who, never having to pay a price, sheltered by their media buddies and contributors and sycophants, never seem to change, unless for an instant when they find it politically suitable.

Putty in their hands.

PBS, the Public Broadcasting System, is taking a shot at again reviewing what happened in a new series, “Vietnam War”, a ten part series that just aired its first episode, one that being far from home I haven’t seen.  I have seen several reviews, informal reviews shared by Citadel classmates who fought there and formal reviews from people like Don North (PBS’ ‘Vietnam War’ Tells Some Truths), a veteran war correspondent who covered the Vietnam War and many other conflicts around the world.  A river of reviews will probably flow to join the ocean of articles and essays and studies and books and movies, none adequate to express what happened or why it keeps happening, or the layers and layers and layers of prices paid; or the lives ruined or the lives salvaged, or the changes made in myriad psyches.

I generally shed tears every time I see anything that touches on that epoch, or experience art forms that manage to evoke the psychological trauma for everyone involved, one way or another: tears of pride for my classmates and of grief for the suffering and of shame because I did not share in their experiences and of relief because I’ve yet to have to kill another human being.  I was in a car accident coming home for Christmas break my senior years and so, rather than drop bombs  and dodge antiaircraft fire, I served as a liaison officer and instructor at a military academy watching my students go off to war and usually return.  I recall echo taps at the Citadel before I graduated when one of our graduates paid the ultimate price for politicians’ follies and after graduation, the letters letting us know when others had died, and finally, taps again when one of my students too was gone, long, very, very long before his time.  But none of that touches on what it had to be to have been there, or to have returned expecting something different, or to have sucked it up and made something meaningful of my life, no matter what had happened or why, or to have given up and lost it all.

The war seemed to have changed the United States, at least for a while, for both better and worse, on every side.  As in the case of the Civil War now reignited for political gain by the worst among us, politicians, pundits and journalists, it seems a war without end, without resolution, without lessons learned; polarization still inchoate and I wonder how we’ll react to this new series, or to the next, or to the next; after all, prequels and sequels blending propaganda and entertainment always seem to sell.  I wonder just how much more polarization we can afford right now and whether anything good will ever come of it.  Or whether we’ll just sink into the dustbins of history, swept there by our own hubris and bad faith, or rather, that of those who again and again move us towards our dooms on their ornate checkerboards of fate.

“All the world’s a stage” Shakespeare wrote “and each must play a part”.  I don’t really care whether or not there’s a Heaven really, I’m at best a questing agnostic, but I do know that I hope there’s a Hell for politicians and financiers and journalists and government functionaries who so deftly and without regrets send us to fates neither we nor our victims deserve.

Here’s to Lucifer, the Roman god of truth and light, may he know just how to deal with them.
_______